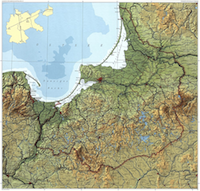 The District Community of Ortelsburg

The District Community Society was founded in 1948 and registered as a charity in the city of Herne (Germany) in 1982. It is an association of refugees, displaced persons after the Second World War, resettled inhabitants of the district of Ortelsburg (since 1945: Szczytno)/East Prussia and their descendants to maintain their native interests.
The society is non-political and non-denominational.

Tasks and goals of the society are set out in a statute in its latest form from 20.03.2010. The society is located in Herne, the partner city of the district of Ortelsburg.

The aims of the society are:
Preservation and care of the ethnic bond of the members in particular through meetings and the publication of the Ortelsburger 'Heimatbote' ('Home Messenger').

Taking measures to preserve the native heritage, in particular the development of native literature, the upkeep of the meeting point 'Heimatstube' and the expansion of the society's archive.

Recording in the society's database of all people who were born in the Ortelsburg district or who have the "home right" and also people who are interested in the activities of the society.

Provision of information on requests from authorities, expatriats or their descendants with the aid of our database or archive.

Support of the people and their descendants who have remained in the old "home", today's Poland.

Maintaining the link to the partner city of Herne (Germany).

Board of the District Community Society in the 'Landsmannschaft Ostpreussen e.V"